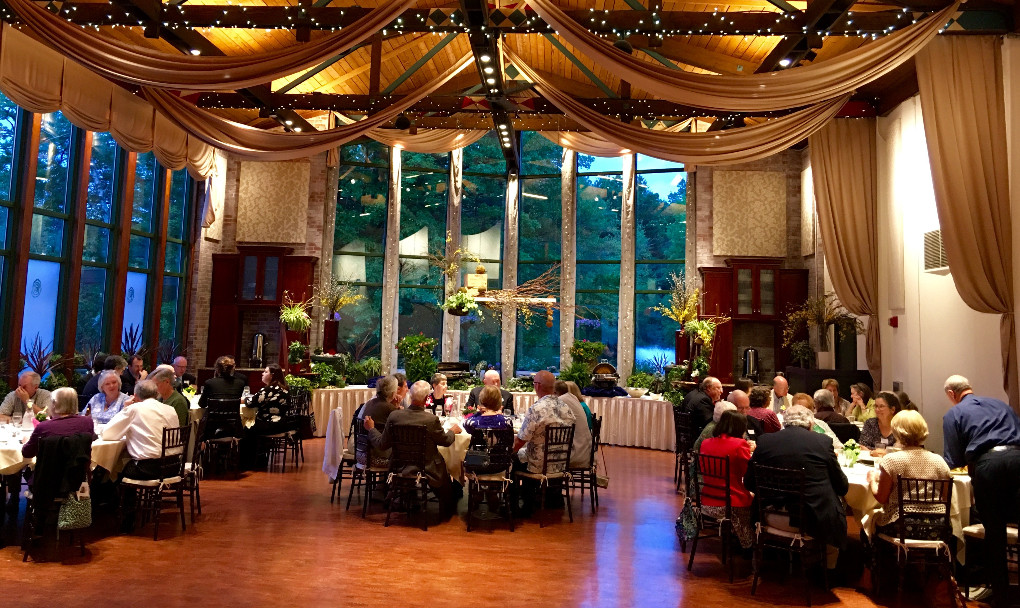 About 50 members gathered at Elizabeth Park’s Pond House on Tuesday, May 23 for our chapter’s annual dinner and meeting. We started with a non-sectarian grace, which we sang in canon, and the food, served buffet style, was very enjoyable.

The meeting itself opened with out-going Dean Kari Miller’s remarks, which included the achievements of our Chapter through Jolidon Fund grants. Both John Coghill and Christa Rakich were able to expand in greater detail about the fund. This year, rotations off that committee include original members for the first time. We heard about the initial work involved in deciding how the grants process might be organized, how to educate members on applications, and how projects would be decided on. The Jolidon Fund Sub-Committee’s gatherings have served as a think tank, and this has been as helpful to our Chapter leadership as the grant decisions themselves.

Among the projects funded have been annual gifts to Pipe Organ Encounter offerings, which this year includes our own Chapter’s hosting a POE this summer. Vaughn Mauren, who is organizing this event, spoke to the progress and exciting offers both financial and in volunteer time which have been received; to add your interest and energy, please contact him. Nineteen of the possible 20 spots have registrations. The Chapter’s commitment to this and to a program which awards grants to fund lessons for up to ten beginning organists a year have become line items in our budget.

Similarly, the Chapter has dedicated itself to providing the first prize at the Albert Schweitzer Organ Festival Hartford (ASOFH) and a further prize for a competition in hymn playing. The reference to ASOFH took us to our thanksgiving for the life and contributions of David Spicer to our chapter. His wife, Dana, is interested in any aid we, his colleagues, can lend to sorting through and disposing of some of his multiple, rich collections of church music-related enthusiasms.

Kari led us in thanking many Chapter members for their involvement and contributions to Chapter leadership. Mary DeLibero, as at-large member of the Board rotates off as does Kari. Continuing on the Board are Alan Macmillan, Peter Niedmann as Dean, Vaughn Mauren as Sub-Dean, Mark Child as Registrar, and Noah Smith as Secretary. Newly elected members at large are Darlene James and Susan Carroll.

As a Chapter, we enjoy a rich resource in news available to our membership (and beyond it). Ed Clark and Joan Pritchard prepare our newsletter each month (except July/August). Their gift involves taking reports, announcements, chapter events, and similar submissions, and turning them into an accessible online newsletter for our membership, which contributes significantly to our shared work! John Coghill drew our attention to the many creative columns Kari has written as dean. Our website has become a “go-to” resource not only for our members but for chapters further afield. It is rich in information not only about what is going on, but how to find out more.

We recognized individual achievements: John Parsons retires from 37 years at his church in Southington. John Rose has overseen the programs, organs, and chapel choir at Trinity College for 40 years, and will be missed as he retires. Jason Charneski, Rick Coffey, and Deb Gemma all received Chapter thanks as they move beyond our borders.

Kari helped us thank Joanne Coghill for her generous and reliable provision of hospitality at events. Cheryl Wadsworth and Suzanne Gates, along with John Coghill, supported her work.

In regional and national news, we thanked Cheryl Duerr for continuing as regional chairperson, and noted the upcoming regional convention in Montreal.

Peter Niedmann, Sub-Dean becoming Dean, presented the program plans for the 2017-2018 season. The intervals between programs helpfully coincide with organists’ busiest periods! Please consult the website for dates, times, places, and backgrounds of our visiting artists.

Faithful treasurer John Coghill presented his financial report for the fiscal year closing June 30, and the proposed budget for the year starting July 1, 2017. Questions were answered, including the discrepancy between our membership numbers and national headquarters’ return of the chapter portion of membership renewals. The Board offered its speculations on this. Our membership has shrunk through deaths and retirements, but non-renewals also account for the drop in dues income. The presence of several new members speaks to our continuing life, energy, and activity as a Chapter.

John C. introduced his partners in financial stewardship for our chapter: our CPA, Anne Harney, and our Jolidon Fund investment specialists, David and Adam Mangs. Their participation added further detail about account value, to the close of the market day! The proposed budget was approved, along with the update in Chapter signatories who will be John Coghill (treasurer), Peter Niedmann (Dean), and Vaughn Mauren (Sub-Dean). Their terms in those positions start July 1.

The meeting was both effective and efficient. The Chapter is in a good position for both local and outreach projects for the near and further future.

Thank you to Dale Eberhardt for taking photos of the meeting.