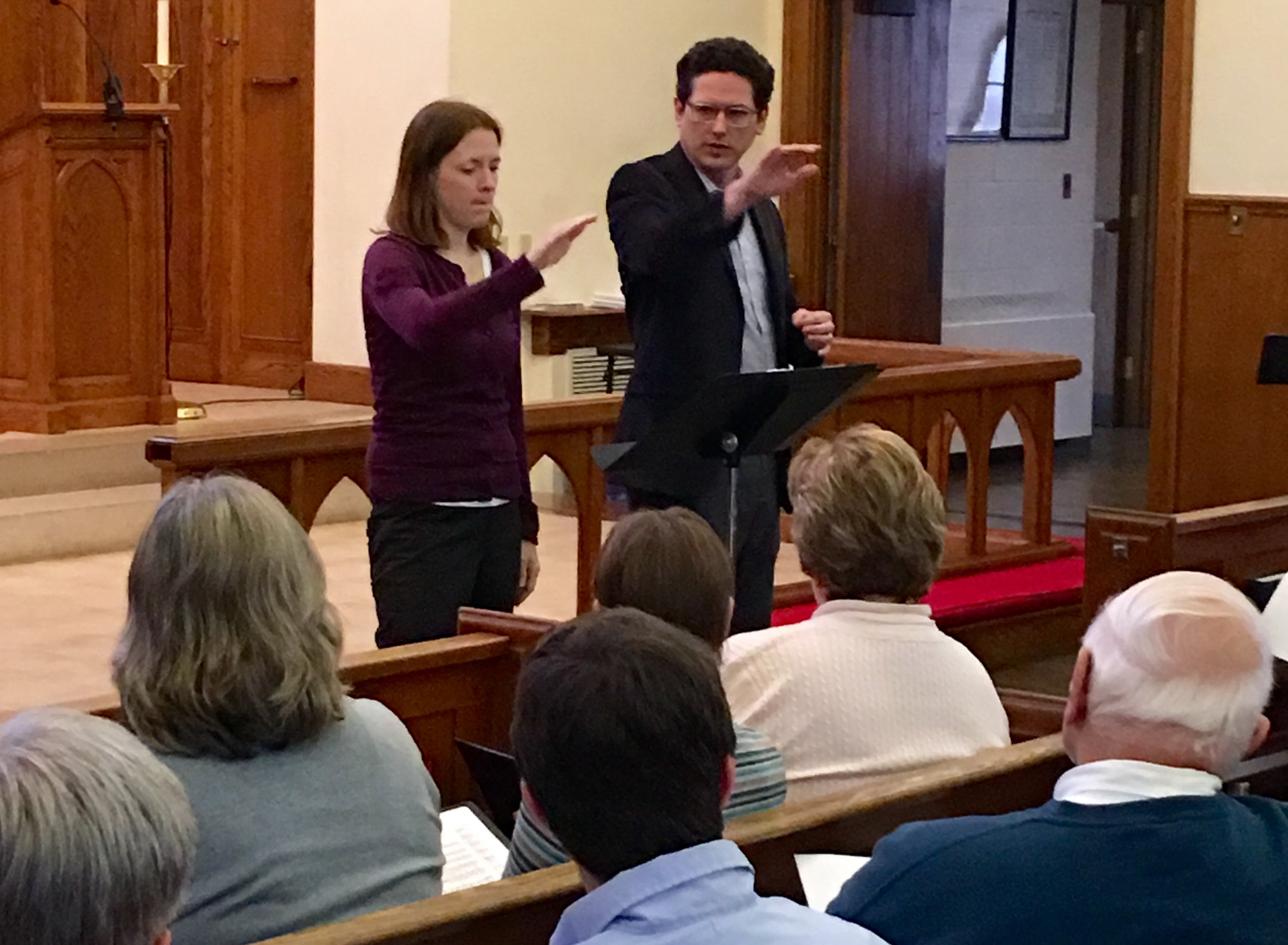 Seventeen singers and several non-singers enjoyed the conducting masterclass on Saturday May 6, 2017 led by Jeffrey Douma (pronounced dow-mah). Douma is conductor of Yale’s venerable Glee Club and founder of Yale’s Choral Artists. There were three conductors: Bridget Scarlato (pictured in photo), Jackie Harris-Stone and Dylan Koerner. Douma prefaced his work with the conductors by discussing the importance of communicating a clear concept of a choral work. The concept comes first and is determined through study of the score. Second, the conductor’s gestures must show exactly what they are meant to show. Douma cited the frustration singers feel when unsure of what a gesture might mean and how that frustration can be exhibited in their sound.

All three were able to modify their gestures with Douma’s clear suggestions. On getting a choir started he commented, “look like you know they will come in and that they will sound good.” Douma discussed hemiola treatment and three options and said “conduct the music and not the meter.” Although he did note that instrumentalists might not appreciate a hemiola pattern that takes away their sense of where the first beat is.

His most important comment of the morning was “…gesture has meaning if related to something in nature.” An example of this was conducting a forte as if you are holding a big weight. He noted the softest dynamic can often be shaped with little or no gesture as in Locus Iste of Bruckner after ‘sacramentum.’ Douma discussed the three dimensions of conducting gesture: the plane, the size, and whether continuous or stopped.

He noted the controversy around tied notes in many English composers such as Ralph Vaughan Williams: whether to cut off the choir on the last tied note or after it on the rest following. He prefers to treat these on a case-by-case basis. Douma recommended score study for hints as to treatment of like consonants: noting a word ending in ‘t’ and seeing how the composer treated a prior word ending in ‘t’ made a lot of sense to this reviewer.

On mouthing the words he had this to say, “it should not be constant or else singers only look at the mouth and not your gesture.” He noted the power of rarely using the mouth when the conductor wishes to shape the sound (especially to affect vowel and pitch conformity at cadences).

Many thanks to accompanist and choir organizer, Peter Niedmann, to Vaughn Mauren, host, and to the Coghills and Suzanne Gates for the reception following.