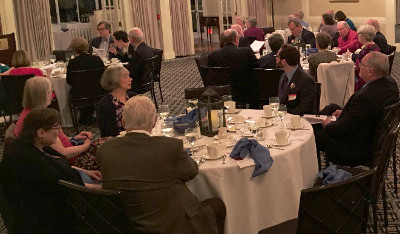 Forty people gathered at Avon Old Farms Hotel for the annual dinner and meeting on Monday, May 23 and heard plenty of evidence that our chapter is bubbling along with excitement in both big and small ways. Following a tasty cocktail hour and dinner, our dean, Kari Miller, emceed the annual meeting ritual of reports and votes. Throughout the evening we heard from various people about what’s been happening. Some steps of progress include these small but mighty victories:

We also learned about some larger initiatives that are quite exciting:

In addition, the much anticipated revealing of next year’s program did not disappoint. Subdean Peter Niedmann said the chapter board aimed for something different. Events include:

Check out all the of next year’s program details at this link. 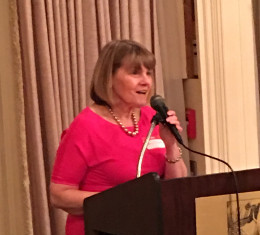 Cheryl Duerr, our regional AGO councillor, brought us up to date on wider AGO events that are generating interest, in particular the next regional convention in Montreal. The Montreal Organ Festival, to be held July 2-6, 2017 (with extra convention events on the 1st and 7th), is a joint event of the Northeast Region AGO and the Royal College of Canadian Organists (RCCO). Cheryl said that they are expecting 500 to 1000 people based on surveys and will be opening registration in the next few weeks so that hotel blocks can be determined based on need. Keep an eye out if you want to go! Taking a cue from this adventure, Cheryl has been talking with the Portland, Maine chapter about possibly locating the 2019 regional convention in the Maritime Provinces. Going north for fun seems to be a trend. 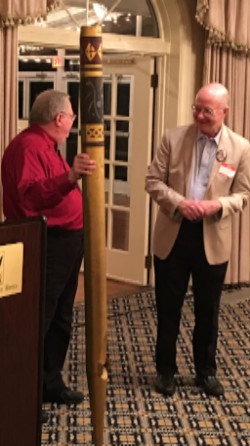 As expected, but not to be taken for granted, were the election of officers and the recognition of volunteers. New to the chapter board will beDoug Duca and Dr. Alan MacMillan. Stepping down from their roles are Amy Vinisko, secretary; Ron Coons, member-at-large; andJim Gower, chair of the Jolidon Subcommittee. Others recognized included John and Joanne Coghill for hospitality and the newsletter editorsEd Clark and Joan Pritchard. David Mangs, Adam Mangs and Anne Harney were thanked for their help in managing our financial affairs. Jim Gower received a certificate of appreciation for doing a great job paving the way as the first chair of the Jolidon Subcommittee. Bon Smith made a personal presentation of a painted and stenciled façade pipe to Ed Clark on his 51st year in Farmington. The pipe came from the old Johnson organ that Ed listened to as a child at Second Church in Westfield, Mass.

The evening was a satisfying coda to a successful program year and an affirmation that all is well in the Greater Hartford Chapter AGO.