The Northeast Regional Convention of 2015, held in New Haven from June 28 through July 1, was a high point in the year for me and I’m sure for many others. Packed full of services, recitals and seminars, and exceedingly well run by members of the New Haven chapter, the convention was a veritable smorgasbord of events. Indeed, this account will necessarily be highly selective inasmuch as no one person could possibly have attended all the concurrent events, and an exhaustive list of those deserving recognition would be too long to enumerate here.

Sunday Evensong at Trinity Church on the Green was a most appropriate way to open the convention: a worship service with a wide variety of music. No fewer than two office hymns in addition to the obligatory final hymn offered opportunities for all to participate. One of these was the recent “One human heart can hold:” a collaboration of Thomas Troeger and John Abdenour, director of the choir of St. Paul’s Church, Fairfield. Scott Perkins’ “O Gracious Light,” commissioned for the convention, provided an inspired Introit and was beautifully rendered by the combined choirs of the Trinity Choir of Men and Girls and The Choir of St. Paul’s. The choirs also sang Psalm 145 to Ivor Atkins’ chant, Howells’ St. Paul’s service, and Balfour Gardiner’s Evening Hymn. Andrew Kotylo, Associate Director of Music at Trinity, was the very able organist for the service. His last minute substitution of Howells “Paean” (a favorite of mine) for final voluntary was a pleasing surprise.

With perhaps too short a break for a proper dinner, it was time to head to Woolsey Hall for what proved to be the most dazzling organ playing of the entire convention. Peter Richard Conte’s program of orchestral transcriptions on the incomparable E.M. Skinner organ left one’s jaw somewhere below the knees. To watch his feet as well as a left hand which, almost like a contortionist’s, never ceased bridging manuals while bringing the contrasting lines of “Wotan’s Farewell” and “The Magic Fire Music” from Die Walküre of Wagner, to life with clarity and perpetually changing colors, was an amazing experience. Dupré’s Passion Symphony and Conte’s own transcription of Elgar’s Cockaine Overture filled out the program; the organist dispatching these with equally astonishing virtuosity.

Monday morning, at the United Church on the Green, a regional meeting was held during which individual chapter news was briefly shared by the attending deans. Immediately following, the Convocation consisted of a worship service with an inspiring keynote address by the Rev. Thomas Troeger of Yale Divinity School. Musically, there was some exceptional singing by the Elm City Girl’s Choir whose extraordinary versatility spanned some perfectly idiomatic Byrd, arranged by conductor Tom Brand, to a South African medley complete with drumming and celebratory African vocal effects. The Shoreline Ringers (handbells) as well as Ann Arbor’s Audivi Vocem choir (8 singers including two countertenors and a Russian style basso profundo) contributed equally excellent performances to a most memorable service.

Monday afternoon, at the First and Summerfield United Methodist Church, Jeffrey Brillhart, who teaches improvisation to graduate students at Yale, shared his unique approach to teaching with two volunteers from among the attendees. Later that evening at Yale’s Battell Chapel, Brillhart’s performing skills were put to use with a moving and brilliant improvised Postlude on “Divinum Mysterium,”aka: “Of the Father’s Love/Heart Begotten.” Another notable improvisation in a totally different but engaging style based on “Lobe den herren” was offered as a prelude by Anne Laver, Assistant Professor of organ at Syracuse University. This event, entitled “Ev’ry Voice In Concert Ring!: A Festival of Hymns,” was for me the most moving experience of the Convention. 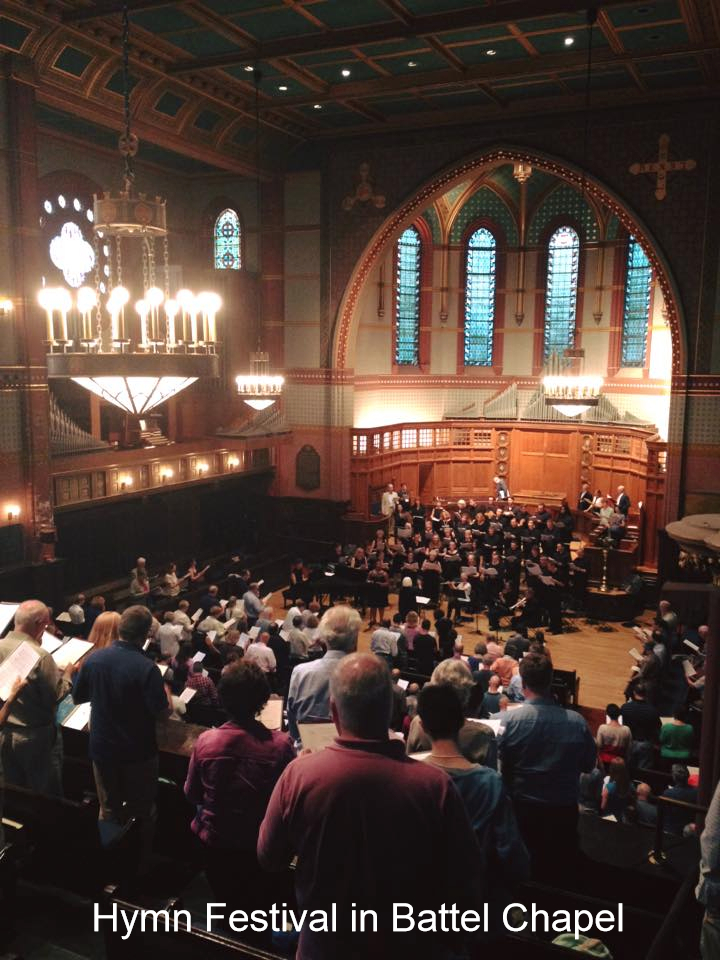 The selection of hymns ranged from such basics as: “Praise to the Lord” sung to “Lobe den Herren” and “Love divine, all loves excelling” sung to “Hyfrydol,” to “Our music plumbs,” a 2007 collaboration of Thomas Troeger and Christopher M. Lee. Most hymns in the Festival were preceded by improvised introductions, each by a different organist including James Bobb, Martin Jean, Peter DuBois and Thomas Murray. Marguerite Brooks conducted a combined choir of singers from eight different New Haven churches including members of the New Haven Chorale and “Audivi Vocem” to lead and shore up the congregational singing. Alone, they sang selected verses from the congregational hymns and provided, along with soloist Erin Donaldson, just the right African American Gospel style. Audivi Vocem also sang an elaborate but tasteful a cappella setting of “What Wondrous Love is This” arranged by their director Noah Horn: (imagine, if you will, “hocket” outside late Medieval Masses…it was there!) A nice touch to “Come thou Fount” sung to “Nettleton,” was the inclusion of a flute and violin played in an appropriate Appalachian folk style. Additionally, local clerics offered prayers and readings related to music in the praise of God interpolated among the hymns.

Tuesday morning’s activities all took place at Yale Divinity School where it was difficult to choose among many interesting events. I settled on what proved to be an illuminating session on coaching and conducting both secco and accompagnato recitatives in Bach’s St. Matthew Passion led by Marguerite Brooks and James Taylor, a prominent Bach Passion – Evangelist tenor. To keep everyone engaged and on their toes, attendees participated vocally by singing the string parts of the accompagnato recits. Although happy with my choices of events at Yale Divinity, I only regret having missed visiting Marquand Chapel and hearing the Krigbaum organ.

In the afternoon, at the bright and spacious St. Francis Roman Catholic Church, Barbara Owen gave us a history of the Hook and Hastings organ Co. Her obvious love for her subject helped communicate a real flavor of 19th century New England. This was followed by an all too brief recital by Joseph Ripka on the twice transplanted Hook and Hastings organ there (Op. 750 -1874). The Bach Prelude and Fugue in C, BWV 545 as well as Franck’s Pastorale gave a good sense of the range of the instrument and were excellently performed by Ripka.

That evening the convention banquet took place at the Omni Hotel, with an ample and tasty buffet dinner. Dr. Joe Utterback and Kristin Huffman brought some needed light entertainment: jazz piano, song and lots of laughs. There was no lingering, however, as directly after dessert it was off to another Catholic church with another H&H organ. The Dominican Friars maintain St. Mary’s and it is a beautiful church, the vaulted ceiling painted a dark red. Here one also found what proved to be a perfect match of instrument and acoustic. As a listener, I would never choose Rheinberger over Messiaen, Dupré or Vierne, but Diane Meredith Belcher made a convincing case for him in her performance of the Sonata No. 8. The final Passacaglia brought the crowd to its feet with many “Bravas.” Richard Dirksen’s transcription of “O God of Love” from John Corigliano’s The Ghosts of Versailles must not go unmentioned: a study in mystery and color and played exquisitely by Ms. Belcher.

The next morning, I was privileged to attend a lecture by Yale Prof. Dr. Markus Rathey on “Re-interpreting Luther: Lutheran Chorales in Bach’s Chorale Cantatas and his Organ Works.” The title may sound dauntingly academic, but it was perhaps the most inspiring talk of the convention. Rathey delved into the development of Lutheran theology between the time of Luther and the time of Bach. (We tend to forget that that is some 200 years!) The Pietistic influence in the texts Bach set and his tendency to focus on highly personal expressions of faith are intriguing. Rathey speculated much on Bach’s personal faith without drawing conclusions that could not be proven. Yet his research and knowledge were highly inspirational and left us with thought provoking questions.

The rest of Wednesday involved the choice between a trip to Stonington or a free day in New Haven. I chose the latter having missed out on an earlier trip to Yale’s Gilmore Music Library. There, on display, were the original manuscripts of Hindemith’s 3rdSonata and Ives’ “Variations on America” along with other treasures dating back to the 17th century. Manuscripts hold a particular fascination for me; somehow bringing a sense of the composer’s personality just a bit closer. 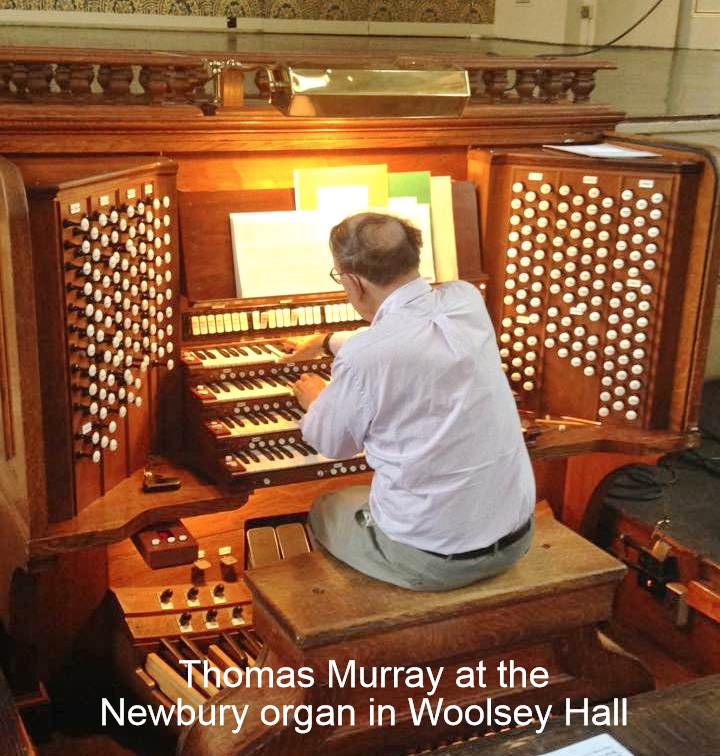 The final evening was spent back at Woolsey Hall where it was Thomas Murray’s turn at the Newbury Memorial organ. Rheinberger was again represented with the 3rdSonata, a more diminutive offering than the 8th played by Ms. Belcher, but impressive at the patrician hands of Murray. A tribute to Yale composers included Bruce Simonds evocative “Iam sol recedit igneus” as well as the second convention commission: Christopher Theofanidis’s “All joy wills eternity” (2015). This was clearly a work of its time, but not without appealing lyrical qualities. The composer was present and received a warm greeting and a hug from the performer.

A reception back at the hotel brought to a close a convention so rich in experience that it will not soon be forgotten.